How to Keep Your Quartz Banger Clean

One of the most frequent questions I get asked being the resident stoner smokesman and scribe on Stuff Stoners Like, and the host of the Hot Box podcast, is how in the hell does the quartz stay so shiny? Surely you aren’t using that very same quartz to take dab after dab, day after day? My answer? First of all, don’t call me Shirley, second, it’s all the same quartz, so if you follow me on Instagram and enjoy the dab videos and other nonsense I post, you’ll be familiar with it. From the Halen’s to the Hoye’s to the China P’s, as long as you take care of the quartz properly, you shouldn’t have a problem.

What’s the first rule of keeping the quartz chazz free? Don’t take hot dabs. If you are concerned about the puddle getting left behind, don’t be. Unless you are rationing out reclaim, just pour it out or suck it through into a claim catcher and save it for a rainy day, or better yet, for some edibles. If the extract isn’t distillate, chances are it isn’t fully decarboxylated. This needs to happen if you are looking for the more psychoactive effects of the edibles. Guess what that reclaim is? Yep, mostly, if not fully decarboxylated oil, meaning the THCA has turned into THC. 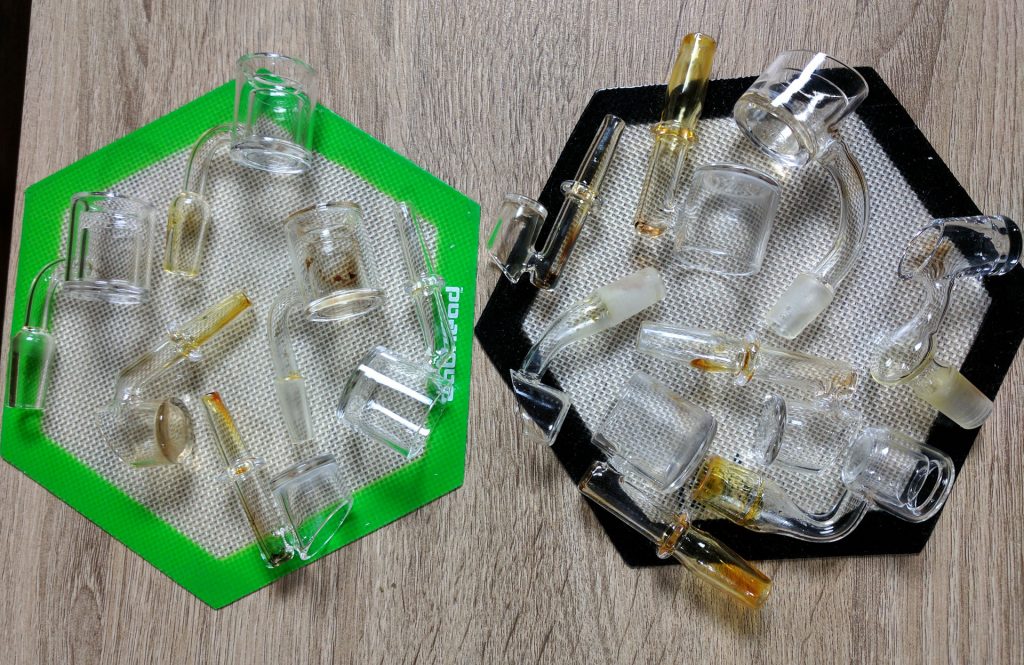 You can try taking smaller dabs, or getting a larger banger with more surface area, a thicker bottom to retain heat, and even try experimenting with different styles of carb cap. My rule of thumb is this. If you black the banger, you took the dab too hot. That’s not to say some people don’t enjoy hot dabs. I have several friends that do, and they know to either bring their own banger, or to wait for me to bring out a special chazz banger for Mr. Chazz Chazzerson to use.

How to keep your quartz looking so fresh and so clean

I made this video to help you visualize what’s going on here. In it, I explain how to use and clean a thick bottom jacketed quartz banger, a thin bottom thermal banger, and a J-Red Knot.

You can definitely save a banger after a hot dab, but the more carbon build up, the more chazzed up the banger will get after a torch cleaning. The other thing to remember is not to swab out a hot banger. You don’t want the banger cold to where the leftover oil is sticky again, but you also don’t want to dab the cotton. I know some of you have graduated to using glob mops or some other sort of swab, but for real, it’s just a big qtip. I prefer these ones but only because the deeper dish bangers tend to get the handle sticky on a regular size qtip.

I also see a lot of people using alcohol on their qtip when they swab out a hot banger. I feel like that’s overkill, and if you are going to use alcohol, it should be for a soak, not to attempt to swab out a hot banger before the owner of said banger sees your chazzy deed. But again, there’s an infinite number of ways to skin a cat, and I’m just documenting mine. 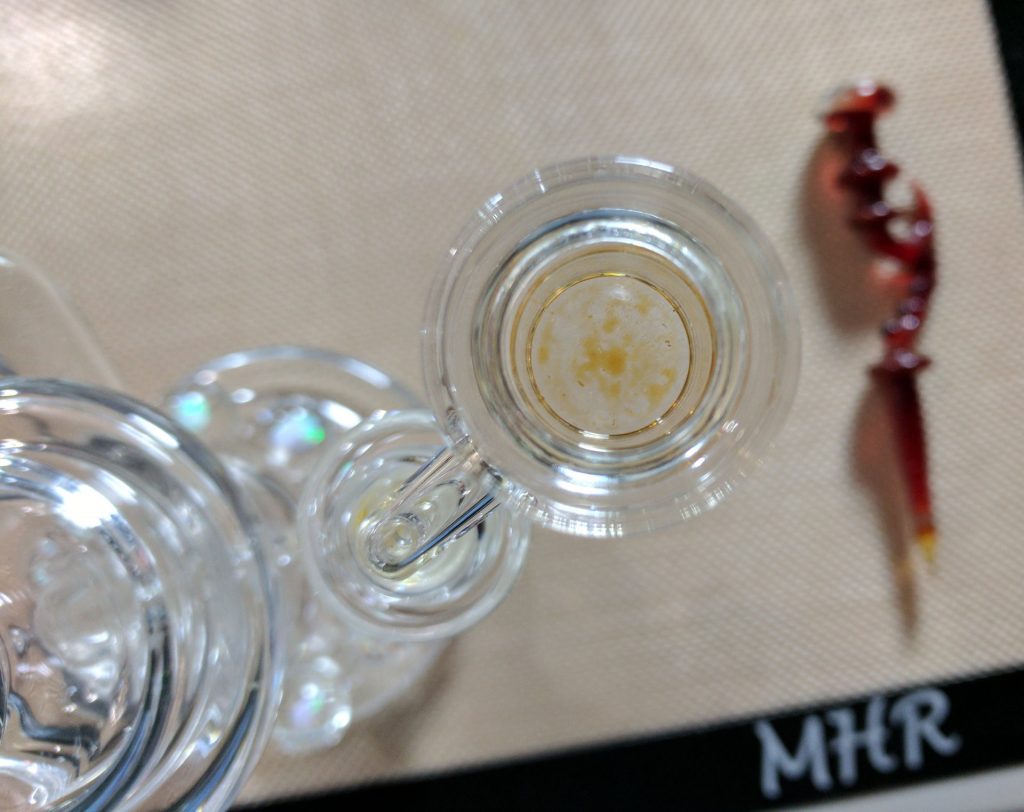 So not too hot and not too cold, wipe that banger out after every dab you take. I know it can become monotonous, and you definitely don’t have to do it, but with the jacketed bangers or the China P’s, the more you keep up on wiping it out, the less you will get that ring of char developing. The less that happens, the longer the nail will last without fogging up, chazzing, or oxidizing. Once this happens, the heat retention will be less and you’ll have to re-time your quartz. Some people swear by the crystal cleaner, but I’m not super impressed with it. At least in my testing, I didn’t really see much of an advantage in using it. I still prefer the 99% isopropyl alcohol soak method.

So wipe, then heat the bottom and wait for the ring to creep up, and wipe again, then you can heat the nail back up to get rid of whatever residual might be left on. This is basically the qtip tech. Some people use glob mops, others use cotton swabs. Personally I like the wooden stick single sided qtips. They don’t get fingers all sticky like the shorter, double sided cotton swabs. Get it back up to the temperature you would before you take a dab, and once it cools back down, it should look as good as when you first got it. If you see any pesky carbon buildup just heat those areas a bit longer with the torch when you torch clean and you should be good to go. Just keep in mind, the more that char builds up the hotter you will have to get the banger when you torch clean it, which in theory, causes more oxidization or chazz to occur. 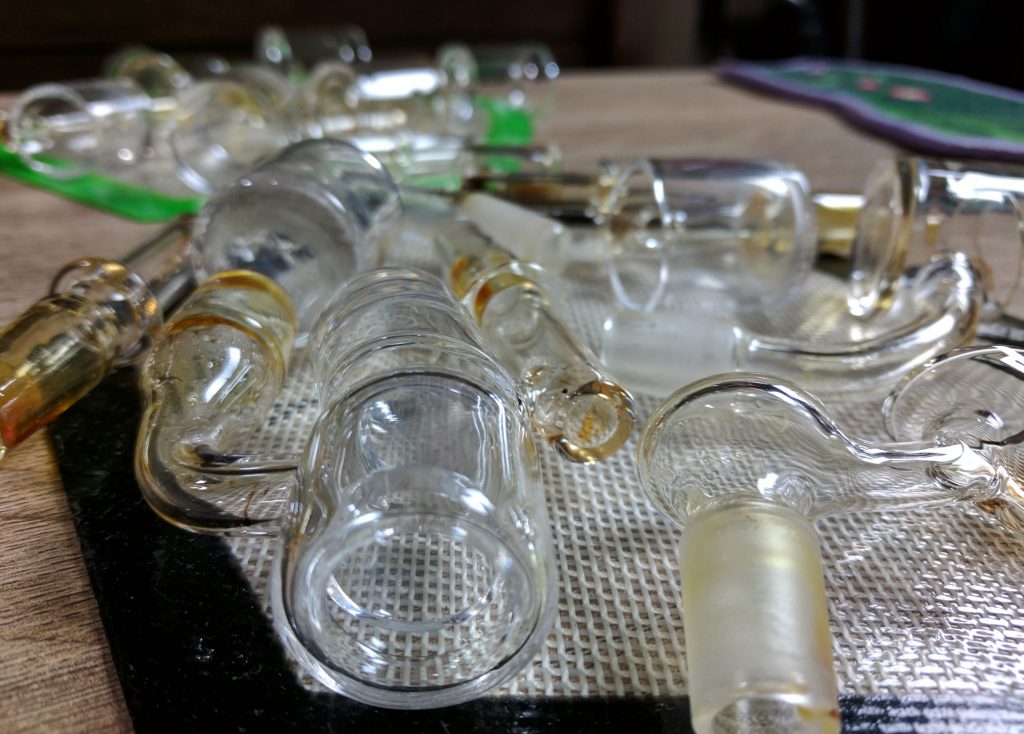 Granted over time, and depending on the quality of the quartz banger you are using, this fogging or chazz effect will start to happen regardless. It’s just a fact of life. You want to know how to keep a quartz banger looking brand new? Don’t ever take a dab off it. The better we can understand that, just like cell phones, there’s an obsolescence that takes place, the happier and more educated consumers we’ll be.

What do you mean by torch cleaning?

Definitely watch the video if you are at all confused about this. Also be careful, the torch is hot. I’m basically saying get the butane or propane torch heating up the shit out of that banger! Heat that thing up, use the torch to clean it. Just be careful and always remember that shit is HOT FAM. Save the alcohol for the rig, and just torch clean that banger. If you get a J-Red Diamond Knot, you’ll know all about torch cleaning. You’ll also know all about refilling the shit out of the Blazer on the reg.

How do you chazz a banger?

Besides hot dabs, dabbing dabs that have a lot of fats and waxes in them can, over time, cause more carbon char to build up. You can see this for yourself if you have two bangers. Use one for distillate only, or other low fat or winterized material, and use the other for something like rosin, or Hush, or something that is dark and meaty with a lot of fats and waxes in it. You’ll see that over time, the banger you dabbed all the poop soup rosin Hush out of has developed significantly more char on it, while the banger that has had the cleaner material dabbed out of it still looks fresh and clean. Again, this changes if you go in super hot all the time, but unless you are shilling for likes by sacrificing your lungs for laughs, you aren’t taking super hot dabs. Right?